The Curious Incident of the Dog in the Night Time: A Main Stage Performance 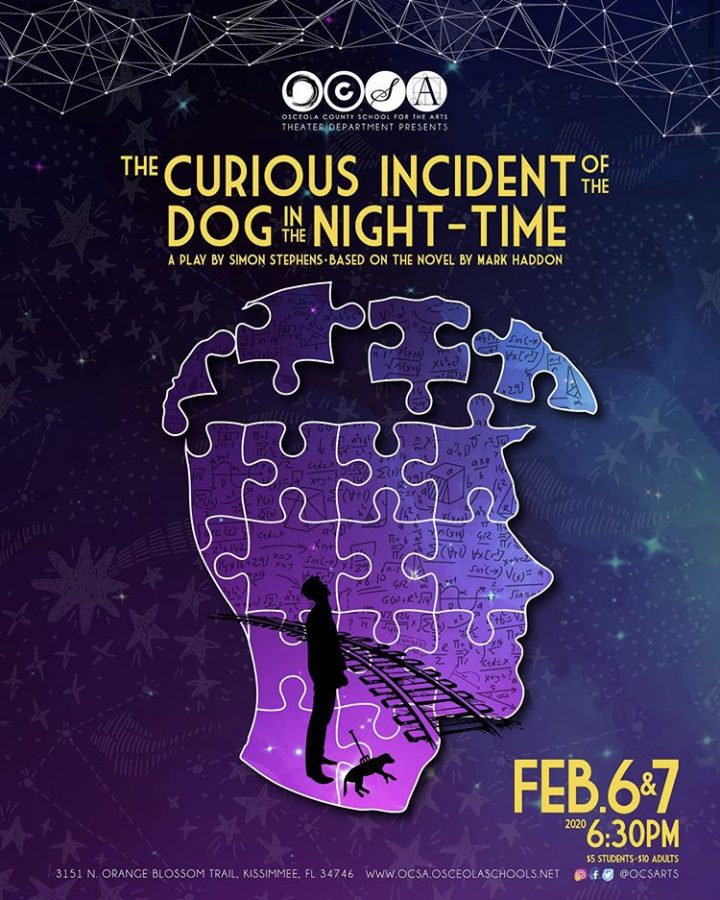 On Thursday, February 6th, and Friday, February 7th, the OCSA Drama Department will be performing "The Curious Incident of the Dog in the Night Time" at 6:30 pm.

OCSA’s Drama Department is performing “The Curious Incident of the Dog in the Night Time” on February 6th and 7th on the main stage!

The play, based off of the novel “The Curious Incident of the Dog in the Night Time” by Mark Haddon, is written by Simon Stephens and regards the mystery of a neighbor’s dead dog’s cause of death. The investigation is led by young Christopher Boone, who is described by the National Theatre, an initiative operated by the Royal National Theatre in London, as having an “extraordinary brain, [and is] exceptional at maths, while ill-equipped to interpret everyday life.” The play delves into Boone’s relationship with parents and school mentors as well.

Tristen Kirby, a sophomore drama major who is playing Christopher Boone, says that playing the character taught him “a lot about acting and life in general.” Since Boone has Autism Spectrum Disorder, Kirby had to do character research on how to play him. Through this, he “learned helpful information about all forms of Autism and how to communicate with people on the spectrum.”

Kirby also says that this role has “changed [his] vision of what a character should be and [learned that] there are no guidelines for playing a role.” In regard to his decisions while in character, he stated that “as long as they make sense for your character, you can do things that are typically frowned upon,” such as swaying and not making eye contact.

Amy Rimmer, also a sophomore drama major, is playing Boone’s mother, Judy, and says that the role helped her “learn how to play a different role of character such as comedic and dramatic.” The play, which is filled with drama, gave her the opportunity to try something new.

Rimmer explained that she was “able to find a way to put [her] own touch to Judy whether its how [she] speak[s], tone of voice, moves, and even making a line funny here and there.”

“The Curious Incident of the Dog in the Night Time” differs from other main stage performances because it does not have an elaborate set or huge cast. Instead, it has a cast of only 10 people and a set that consists of mostly blocks and projections.The play also differentiates itself from other main stage performances in Kirby’s perspective, who says that since the play is told through Boone’s eyes, it “tells an amazing story about dealing with change as someone with a mental handicap, a story that other main stages don’t tell.”

The play, which features projections made by Manny Garcia, senior light designer and projection designer, will cost $5 for students and $10 for adults. Be sure to come watch the show. We hope to see you there!