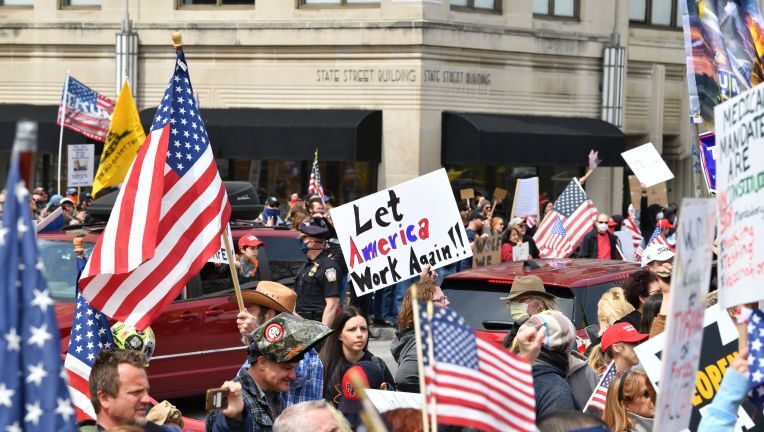 The protest happening in Harrisburg, Pennsylvania.

Currently there are more than 826,258 active cases of coronavirus in the United States. Starting as early as late February, some state governors enacted a Stay at Home Order, which shut down businesses deemed “non-essential” and mandated citizens to leave only for essential activities such as doctor’s appointments and grocery shopping, all while still adhering to prescribed social distancing guidelines. There has been a reduction in the number of COVID-19 cases per day due to these actions.

Unfortunately, closing businesses has resulted in many unemployed Americans struggling to support their families. Medical experts such as Dr. Anthony Fauci, a member of the coronavirus task force and immunologist, cautioned that while the measures are working to keep the virus from exploding, states should not open up again until there is a significant increase in testing and availability of protective equipment. If states open too soon, medical experts fear a second wave of infections will result in high casualties and do even more harm to the economy by prolonging the return of workers to the workforce.

However, even with the warnings and orders enacted, many people seem to think it’s unnecessary. Protests are happening throughout the country, which started after many disagreed with the Stay Home Order once it was enacted. Despite officials’ warnings about social distancing, many gathered on the streets outside capital buildings demanding that their states reopen. In Denver, Colorado and Lansing, Michigan, protestors are blocking the entrances of hospitals, preventing healthcare workers from getting inside and doing their jobs of caring for patients. In a situation that has already put an enormous amount of stress on them, they now have to fight to get inside.

Healthcare officials are overwhelmed with patients, advising that the Stay Home Order should be left alone. In response, healthcare workers have taken to the streets blocking traffic off, preventing protestors from getting through. The anti-lockdown protesters are allied with President Donald Trump’s reelection and are being praised by him. In a tweet he wrote, ““LIBERATE MINNESOTA!” “LIBERATE MICHIGAN!” “LIBERATE VIRGINIA.” Trump is putting pressure on state governors by criticizing their decisions to lockdown their own states.

Opening up the states will just send America into reverse, increasing the spike of the curve, which is why states went on lockdown in the first place, to flatten the curve and save citizens’ lives. People protesting for their state to be reopen are just increasing the number of deaths and number of those that will get infected if they reopen to0 quickly. Dr. Facui said, “What you do if you jump the gun and go into a situation where you have a big spike, you’re going to set yourself back. So, as painful as it is to go by the careful guidelines of gradually phasing into a reopening, it’s going to backfire. That’s the problem.”