An Insight into OCSA’s new Principal 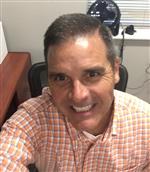 Following former OCSA Principal Dr. Chundra Evens’ move to the district office, there was a new spot in the administration that needed to be filled. Her successor: Mr. Dennis Neal.

Dennis Neal, known to the students as Principal Neal, was born on February 7, 1966 in Florida. He became a performer after college at a theme park that no longer exists called Boardwalk and Baseball. He has been working in the education system for thirty years, and has worked at three schools prior to OCSA. He has a degree in art and art education, making him a perfect leader for our school. “It’s like a dream come true. When this opportunity came and I started thinking about it…I said ‘Y’know what? This [is] like what I should be doing.'” If he were to attend the school as student, he said he would be a Visual Artist.

Being at a 6-12 school is new for the principal, especially a school that has “a specialty interest area here at the school in the arts [sic].” He described his experience as unique, and that it’s been great so far. “It’s been awesome because of the staff and the kids…and it’s a great school. And I’m very excited to be here.”

He, like everyone else, has faced challenges due to the ongoing Covid-19 pandemic. “[I]t’s been, like I said, a great experience as far as being able to work with a great staff and great group of students and parents I’ve met, but it’s also been a challenge because of all the protocols and all the COVID safety stuff we’ve had to implement this year.” There was a lot of work before the start of the school year, as the staff implemented safety measures to protect everyone on campus.

It’s only been a short amount of time, and the school’s new principal has already bragged about the students attending the school. “[Y]ou guys for the most part are very motivated to be here, and that goes not only for your art area, but I’ve also found that academically most of our students excel…so as a principal at a school like that I can’t ask for anything more.” If you’re a car rider at the school, you’ll notice Principal Neal standing by the front gates, waving at every car that enters. It’s clear he cares for the students attending OCSA.

Much like the students, Principal Neal and the administration staff have faced changes during this pandemic. Many of their meetings are being done digitally, and the few that are held in person are limited to small numbers and socially distanced. When the entire staff does meet, they meet in the expo hall all spread out. “For now it’s what we gotta [sic] do, hopefully it’s temporary and soon we’ll be able to get back to more of what we used to be like.”

Principal Neal’s favorite ice cream flavor is chocolate, and he enjoys ice creams such as Moose Tracks and Rocky Road. And when it comes to the controversial pineapple on pizza question, he’s somewhere in the middle.

Principal Neal also has a message for the students at OCSA. “This year, this situation we are all facing, is temporary. [Don’t] get yourself stuck in this mindset that ‘this is the way it’s going to be forever’, and ‘this is how it’s going to be my whole time here’ because it’s not. And we’ve just got to keep that mindset, keep hopeful that better days are coming, and that things are going to come back. Maybe not the exact same as before, because I don’t think anything will be back to the way it was before, a pandemic is going to be changing the way people do things in everything. But it’s not going to stay this way, [so] continue doing a great job and we will get through this.”