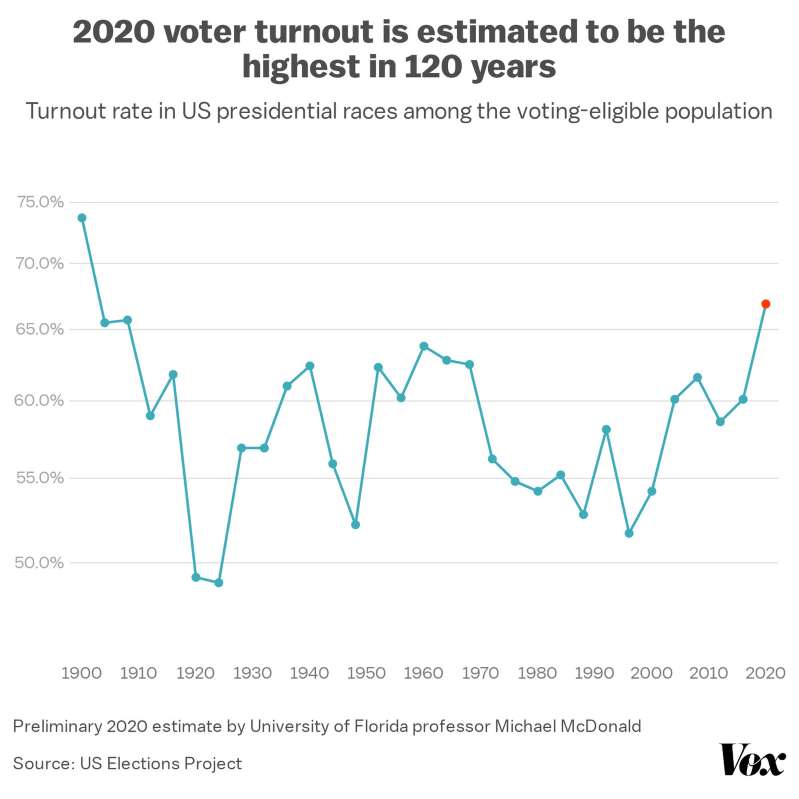 A graph, by the US Elections Project of early voting procedures.

“We’ve never seen this many people voting so far ahead of an election,” said Michael McDonald of the University of Florida, who administers the United States Elections Project. Early voting in 2020 has, without a doubt, surpassed the 2016 election. About 60%t of those eligible actually voted in 2016. In 2020, turnout indicates that the amount of those voting could be the highest in a century.

Four weeks before election day, 4 million Americans had already cast their vote for either President Donald Trump or Joe Biden, which is more than 50 times the 75,000 early voting rate in 2016. More than 160 million people may have voted in this year’s presidential election, according to the US Elections Project. 66.9% of eligible to vote  this year turned out and did just, creating what might be the highest numbers since 1900. By Election Day itself, more than 99 million Americans had already cast their early votes.

Referencing a graph by the US Elections Project (our featured image), most early votes have been sent in through mail-in ballots, making up about two thirds of the early votes themselves.

Enthusiasm among both Democrat and Republican voters continues to skyrocket, both anticipating the results of the election and pressuring members from their parties to vote and make a difference in the turnout of this election.

With COVID-19 still playing havoc on the world at large, and the U.S. not escaping the effects of this pandemic, early and mail-in voting increased greatly in popularity. Americans wanted their voices to be heard, even during a world-wide pandemic, and took full advantage of a safer alternative to voting in person on Election Day.

Even at the time of publication, Thursday 11.5.2020, the outcome of this election is still to be decided as votes are still being tabulated in AK, GA, NC, NV, PA.