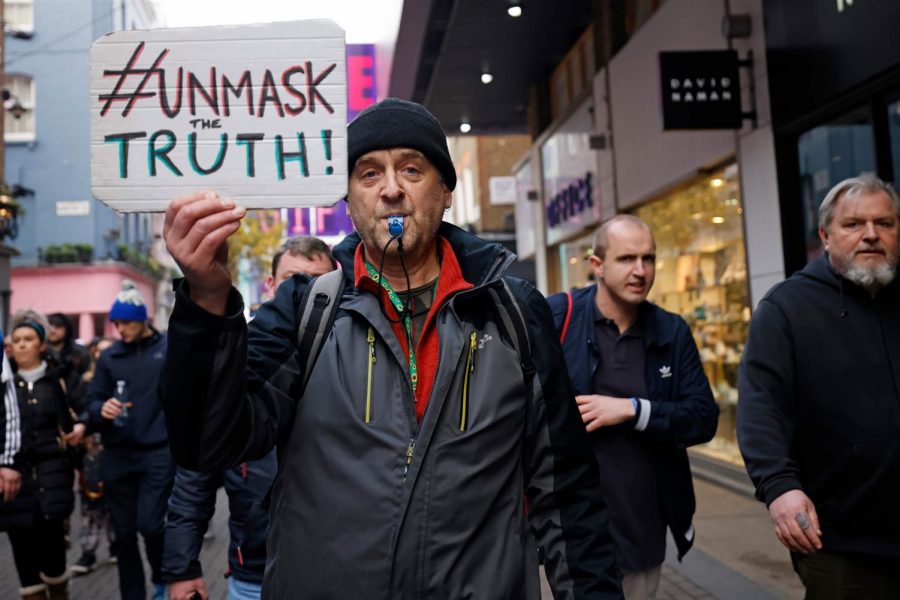 A protester holds up a placard as he takes part in an anti-lockdown protest against government restrictions in London on Saturday.

On Saturday, November 28th, police arrested more than 150 protesters as they attempted to break up anti-lock down and anti-vaccine protests in London, England. Hundreds of protesters, most of whom were not wearing face masks, descended upon central London’s shopping district. They held signs that had ‘unmask the truth’ and ‘no more lock downs’ written on them as they chanted the word ‘freedom,’ in spite of strict COVID-19 rules that banned mass gatherings.

London’s Metropolitan Police said in a statement that officers made a number of “early interventions” in order to prevent people from gathering, and urging people to go home. They added that they intercepted buses transporting protesters into the capital. Those who did not return home were either arrested or issued fine notices. Officers led several people away in handcuffs after protesters ignored their requests to disperse. Several bottles and smoke bombs were thrown as demonstrators scuffled with police. The Metropolitan Police stated that the arrests were made for breaching COVID-19 restrictions, and assaulting police officers.

“More than 150 arrests were made while policing today’s protest in London. We made it very clear how we would police this event, warning those looking to attend that they risked facing enforcement action,” tweeted the Metropolitan Police. In a statement on Friday, they said that protests weren’t a permitted exemption to the current COVID-19 regulations restricting gatherings. “This type of behavior not only breaks the law, it also risks spreading the virus between multiple areas of the country,” added Stuart Bell, the Chief Superintendent of the London Metropolitan Police.

England has been in a national lock down  since November 5th, which was set to end on Wednesday, December 2nd. Most of the country will remain under heavy restrictions, following a strengthened version of a three-tiered system of local restrictions set to curb COVID-19. The United Kingdom has the highest COVID-19 death roll in Europe, with 58,128 deaths since the beginning of the pandemic, according to a tally by John Hopkins University. It’s behind France and Spain in the number of confirmed cases on the continent, at more than 1.6 million. The country’s economy has also taken a hard hit from the pandemic, as Britain’s public debt has grown to 2.1 trillion pounds, which is about $2,819,155,500,000 U.S. dollars.