Insurrection at the US Capitol: the Far- Right’s Latest Power Grab 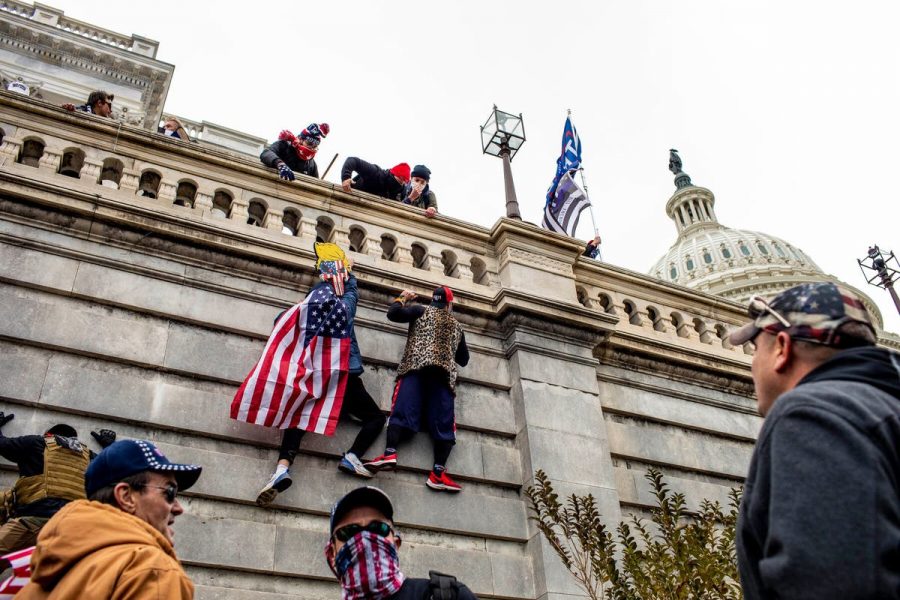 On Wednesday, January 6, 2020, as Congress met to confirm President-elect Joe Biden, a mob of President Trump's supporters overtook the US Capitol.

On Wednesday, January 6th, a mob of hundreds of Far-Right “protesters” stormed the steps of the US Capitol, successfully overtaking the building for the first time since 1814. Conveniently labeled a protest, this attack on the Capitol is the Far-Right’s latest act of domestic terrorism, defined by the Oxford Dictionary as “The committing of terrorist acts in the perpetrator’s own country against their fellow citizens.”

Meeting to confirm President-elect Joe Biden, members of Congress were instructed to put their masks on and drop to the ground when the violent protesters breached the Capitol building. Some congresspeople put on gas masks and removed all House pins assigned to them. Their families feared for the lives of their loved ones.

Supporters of President Trump chanted “U-S-A, U-S-A!” and “Stop the steal!” as they stormed the building, some bringing Confederate Flags into the Capitol building for the first time in American history. One woman who made it inside the building referred to the event as the start of “a revolution.” Inside, Speaker Nancy Pelosi’s office was ransacked, with reports of confidential material being stolen. Signs and podiums were stolen and offices were barricaded. Law enforcement stood guard with weapons pointed at House doors.

Representative Jason Crow (D- CO), a former Army Ranger, said “I thought we’d have to fight our way out.”

Law enforcement failure to prevent the pro-Trump mob from raiding the Capitol is the latest example of exactly what the United States is and has always been; this is an America in which peaceful protests against police brutality are met with tear gas and rubber bullets while an armed coup in the Capitol is met with a handful of Metropolitan police.

At around 6 p.m., in a since removed Tweet, President Trump played into the violence and seemed to spur it on, stating “These are the things and events that happen when a sacred landslide election victory is so unceremoniously & viciously stripped away from great patriots who have been badly & unfairly treated for so long.” He added that rioters should “Go home with love & in peace. Remember this day forever!” The President’s Twitter account has since been blocked by the platform for violating guidelines against inciting violence.

Similarly, in a video that has since been removed from YouTube, Twitter, and Facebook, President Trump recited unfounded claims of voter fraud in the 2020 Presidential Election, spurring additional contempt and violence amongst his fan base.

Republican Senator Mitt Romney issued a statement saying that “What happened here today was an insurrection, incited by the President of the United States.” Adding that “Those who choose to continue to support his dangerous gambit by objecting to the results of a legitimate, democratic election will forever be seen as being complicit in an unprecedented attack against our democracy.”

President- elect Joe Biden called for Trump to “demand an end to this siege.” Later, President Trump told his fan base to “remain peaceful.”

Although President Trump may have called for peace, it was too little too late, and it is clear that his baseless claims of voter fraud and calls for protests have been a driving force for the insurrection seen today on Capitol Hill. Because of this, even major business groups have spoken out against the violence, calling for President Trump’s removal from office for his role in the raid. The National Association of Manufacturers, which had previously backed Trump, referred to today’s events as “mob rule” incited by the President and called for Vice President Pence’s removal of the president from office by invoking the 25th Amendment.

According to Chief Robert J. Contee of the Metropolitan Police Department, a “civilian” woman who was shot during the raid has died. No further information regarding her name or who shot her has been released.

Last summer, when millions across the nation protested against police brutality, President Trump vowed to “dominate” these “extremists.” Now, after at least five weapons have been seized and a mere handful arrested for violently raiding the Capitol building during session, I ask where this call for domination has gone.

For the first time in modern history, a raid like this has posed a real threat to not only our nation’s Capitol and our leaders, but to our democracy itself. If there ever were a time for the Commander in Chief to step up to the role of leading the United States, the time would be now. Unfortunately, the president and his actions have been a major cause for the outbreak of violence at the Capitol, and all the American people can do is wait for his removal from office.

Because of the violence, Washington DC will be on lockdown for the next 15 days, through President-elect Biden’s Inauguration on January 20th. Luckily, brave aides were able to protect Electoral votes from the mob, and Congress was able to reconvene after the madness subsided. However, to say that this raid never should have happened is an understatement. It is supposedly the job of law enforcement to “protect and serve,” but who are they truly protecting?

It is clear that this insurrection was a coordinated one and it is time for these right-wing extremists to be called what they are: domestic terrorists.