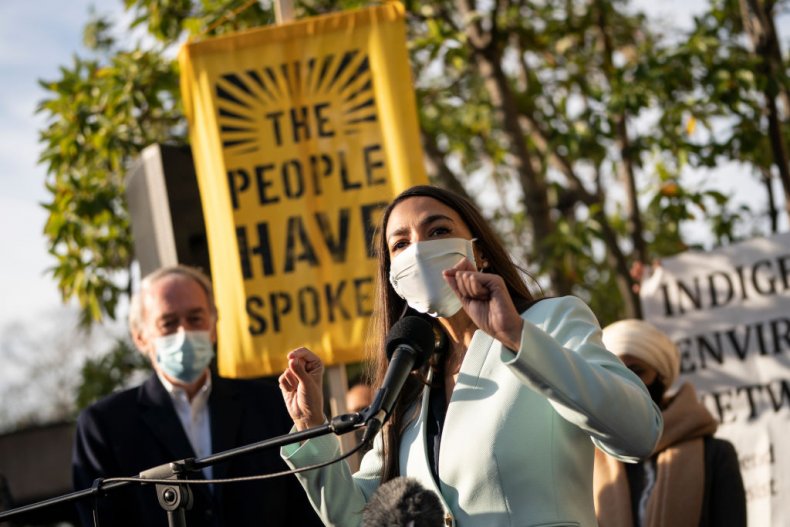 U.S. Rep. Alexandria Ocasio-Cortez (D-NY) speaks outside of the Democratic National Committee headquarters on November 19, 2020 in Washington, DC. Rep. Ocasio-Cortez and others called on the incoming administration of President-elect Joe Biden to take bold action on issues of climate change and economic inequalities.

Millions of Texas residents remain without water or heating, prompting the current and former Democratic congressional members to spearhead fundraising campaigns through ActBlue.

Ocasio-Cortez and former Texas Representative Beto O’Rourke worked together to raise this large sum of money, along with Democratic Representatives Sylvia Garcia, Sheila Jackson, and Al Green. As of Sunday morning, Ocasio-Cortez had raised $4 million for relief teams across the state of Texas.

O’Rourke, who shared the ActBlue donation campaign across social media, commended volunteers for making “over 300,000” phone calls on behalf of senior citizens “who need heat, water, food and shelter (and some basic kindness).”

“BIG THANKS to the volunteers who made over 784,000 phone calls to senior citizens in Texas today,” O’Rourke tweeted Saturday. On early Sunday morning, he posted another tweet, announcing the latest sum of money raised on his part. “Thank you for helping us raise $1 million so far to assist Texans with food, shelter and water!”

This outpouring of charitable efforts by O’Rourke and Ocasio-Cortez ended up forming a stark comparison to Texas Senator Ted Cruz, who has faced a torrent of criticism since photos emerged of him on a flight to Cancun, Mexico, as the state fell into a paralyzing deep freeze.

Speaking with the Inside the Hive podcast, O’Rourke discussed Cruz’s political mentality. “[He] tried to overturn a lawfully, legitimately, democratically decided election, conspired with seditionists, [and] was very responsible for those who were killed in the insurrection, in the coup attempt on the sixth of January. That guy wants nothing to do with government, or at least our form of it,” O’Rourke stated.