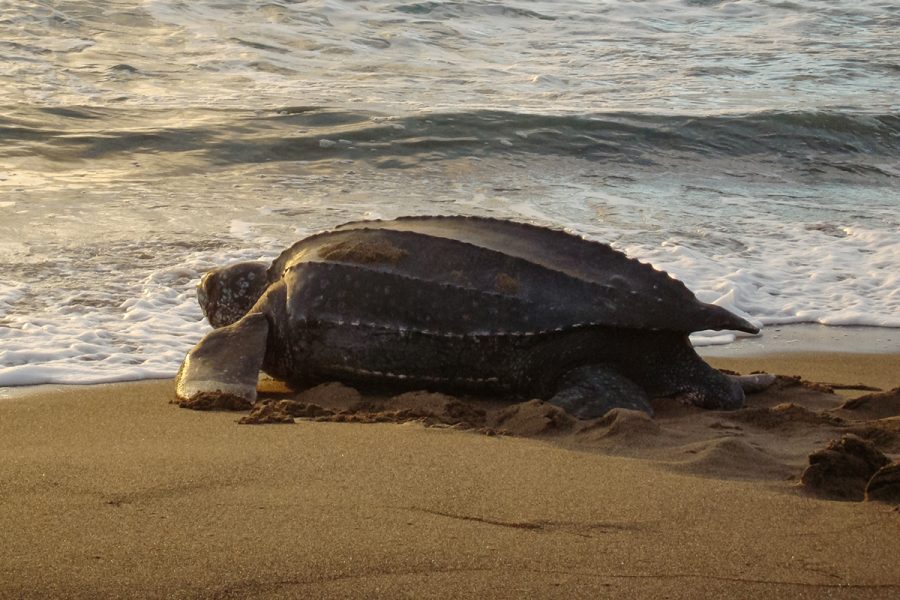 Leatherback sea turtle heading back into the ocean.

Leatherback sea turtles, also known as Dermochelys coriacea, are found in the Coral triangle, Gulf of California, The Galapagos, Coastal East Africa and Mesoamerican Reef. They are also found in the tropical, sub-tropical oceans up to the Arctic Circle and are close to extinction in the Pacific Ocean. Globally, they are listed as vulnerable according to the International Union for Conservation of Nature (IUCN), but many subpopulations (such as in the Pacific and Southwest Atlantic) are critically endangered.

The shells of these turtles are tough and leather like and are the only species of sea turtle that lack scales. Their shell, also called a carapace, consists of small, interlocking dermal bones beneath the skin that overlie a supportive layer of connective tissue and fat and the deeper skeleton. Their carapace has seven ridges along its length and tapers to a blunt point.

These turtle’s front flippers are proportionally longer than in other sea turtles and their back flippers are paddle shaped. These distinctions in proportion make the leatherback uniquely equipped for long distance foraging migrations.

Leatherback’s primary food source comes from jellyfish and salps. It also includes tunicates (primitive marine animals) and cephalopods like sea urchins, fish, algae and sea weeds. They migrate up to six thousand miles from their nesting area to food habitat in search of jellyfish.

Fisheries bycatch was classified as the highest threat to Leatherbacks globally, followed by human consumption of Leatherback eggs, meat, or other products, and human-induced alteration of coastal environments that damages their natural habitat. Marine pollution and plastic debris can endanger marine turtles should they ingest it or become tangled. Disorientation caused by artificial lights is another hazard that plagues hatchlings, as it confuses their instinctive response that leads them seaward on naturally lighted beaches. Climate change increases sand temperatures on nesting beaches, which affects hatchling sex ratios, sea level rise, and nesting habitats.

Marine turtles are the living representatives of a group of reptiles that has existed on Earth for the last 100 million years. They are a fundamental link in marine ecosystems. Leatherback turtles consume large numbers of jellyfish which helps to keep these populations in check. These turtles also provide a vital source of income as they draw in ecotourism in coastal communities, especially in the Coral Triangle.

“For those who may not know, leatherbacks in the Pacific have declined over 90 percent, and the populations in the eastern Pacific have declined dramatically. The once large nesting population in Malaysia is now considered functionally extinct. So really, our glimmer of hope and our area of focus is the Western Pacific. And within that region about 75 percent of the nesting takes place in Papua. So, we’ve had a long-term collaboration in Papua, Indonesia with the goal being on the nesting beach to increase hatchling production, or as we like to rephrase it, no hatchling left behind.” Says Manjula Tiwari, a NOAA Fisheries biologist and sea turtle scientist. It’s estimated that there are around (very roughly) 45,000 to 60,000 Leatherbacks left in the world.

Leatherbacks are protected under various Conventions, national and international laws, treaties, agreements, and memoranda of understanding (a type of agreement between two or more parties). Long-term efforts to reduce or eliminate threats to Leatherbacks on nesting beaches have been successful in many places but not everywhere.

You can help by reducing ocean trash by using less plastic and not littering. Plastic bags and balloons resemble their favorite prey, jellyfish, and when ingested may block their digestive tract, preventing them from eating. Keeping your distance and never feeding or approaching nests are a few other important guidelines to follow to ensure the safety of these turtles.