“Turning Red” Is An Ode To Strong Moms and Daughters 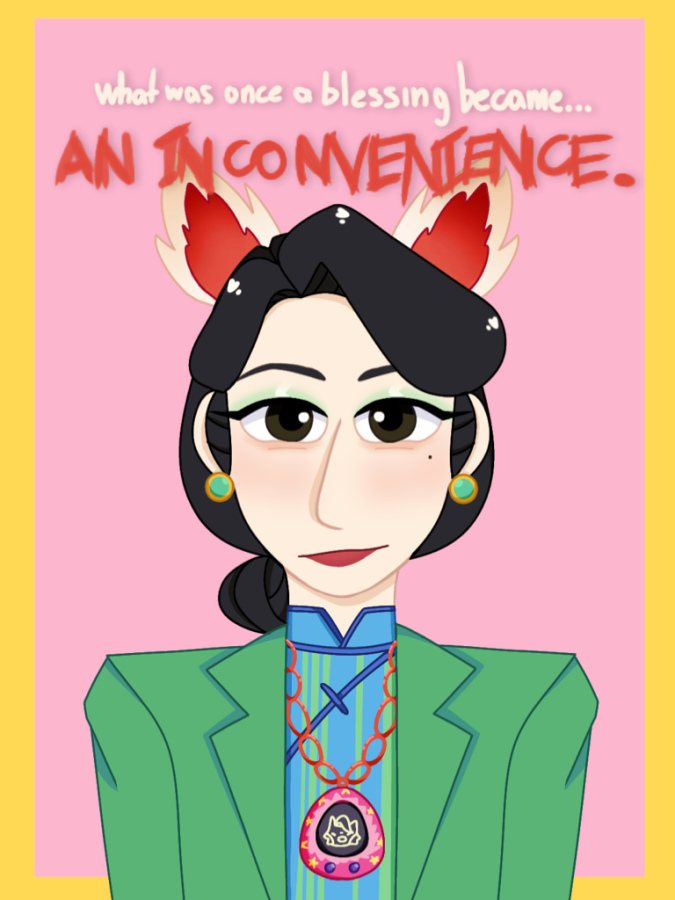 “Turning Red” is the latest film from animation powerhouse Pixar. In case you aren’t familiar with Turning Red’s wild premise, here’s the deal: Mei-Lin Lee is a Chinese-Canadian teenager who discovers that she has a generational condition that causes her to turn into a giant red panda whenever she experiences intense emotions. There are plenty of reasons to love Turning Red- quirky animation, a phenomenal soundtrack, laugh-out-loud jokes, and an adorable furry mascot- but what’s most captivating about this film is its deeply personal story. Mei-Lin, often referred to simply as Mei, faces several challenges throughout the film- but most important of all, she realizes that her dynamic with her mother isn’t what she thought it was. To adequately review this film, spoilers are a given- but I’ll try to minimize them.

The film opens with Mei-Lin narrating over a sequence of her childhood photos. She says that honoring parents is the “number one rule” in her family, going on to list the reasons why she’s grateful for them- especially her mother, Ming Lee. The two have countless pictures together documenting happy memories, winning trophies, and having spa days together. When the montage ends and we are introduced to Mei’s current world, we see that her bond with her mom is still as strong as ever. She passes on spending time with her friends in order to clean the temple that her family owns, and tags along with Ming to give tours of the temple.

However, after an incident that leaves Ming fuming and Mei mortified, the accumulation of her embarrassment and guilt becomes so intense that Mei experiences her first case of turning into a red panda overnight. “The red panda is basically a metaphor for puberty. Seeing how a girl who thought she had everything under control is now big and hairy and smelly and just-an emotional wreck,” says Domee Shi, the film’s director. And with how unpredictable hormones can be, the extra-sudden transformation Mei goes through is very fitting.

When Mei wakes up to find herself all panda-ed out, she hides in the bathroom, missing breakfast. Ming is shocked upon finding out, but tries to remain as calm and supportive as possible. Once Mei calms down, Ming explains that her new form was passed down by the family’s ancestors. However, as time went on, their panda abilities became, as she puts it, “an inconvenience.” As Mei goes to school and lives her life with her new abilities – although with a few more obstacles- she finds the secret to keeping the panda side of her in check. Furthermore, on the night of the next red moon, a ritual can be performed to seal Mei’s panda form away into a talisman- problem solved, right? Wrong.

Mei’s friend group is trying to raise $800 to get tickets to see 4*Town, the hottest boy band that Mei’s mother can’t stand. Even after a whole presentation from her daughter about why she should buy her a ticket, Ming refuses to believe that the boys of 4*town are anything but troublemakers in shiny matching sweatsuits.  However, Mei goes against her mother’s wishes for seemingly the first time in her life by using her panda abilities to raise money. She knows the panda is something that should be tucked away, but her peers are surprisingly accepting of her fluffy persona- and they’re willing to pay big bucks to see it.

Everything is kept under the radar, until the girls are offered the final 200 dollars that they need by bringing the panda to a birthday party- hosted by one of Mei’s worst enemies. Mei will have to sneak out at night to attend, making this one of her biggest risks yet. But of course, Ming finds out- and nothing good comes from it. At the party, Mei loses control like never before, leaving the party’s host on his on backyard lawn, injured and sobbing. Both Ming and Mei are reprimanded by the host’s parents, leaving a strain on their relationship until the night of the ceremony. And while the girls finally have their money, the concert is the same night as Mei’s ritual- there’s no way she’ll will be able to go.

All Mei can do is try her best to stay calm until the day of her ritual, because getting rid of her inner panda spirit is what’s best for her, right? She believes throwing it all away seems to be her only option- until a talk with her dad flips this notion on its head. He reveals that Ming’s panda form was just as wild, messy, and moody as Mei’s. While her panda form was messy and destructive, in reality if it weren’t for Ming’s rebellion, panda and all, they wouldn’t have been together. Mei’s father offers some of the best advice a teenager can get: the messy side of you isn’t something you should learn to hide, it’s something you can (and should) learn to live with.

Turning Red has many messages: coming of age, friendships, the unstoppable sort of power that can only be held in teenage girls- but above all, it speaks to the Asian mother-daughter dynamic.  More specifically, the dynamic between second-generation immigrant parents and their third-generation children is a theme rarely explored in media. In stories about children of immigrants, it can be easy to chalk up every issue to cultural differences. In the case of “Turning Red” with both Ming and Mei being raised in Canada, they’re able to understand each other more. Being able to see this sort of relationship on screen- a mother and daughter with so much potential to be unbreakable yet drifting so far apart- is nothing short of groundbreaking. Although, their story goes beyond receiving good publicity or a pat on the head for representation. It was a deeply relatable story for many people- including myself.

Being raised by a working Asian mother who’s quite similar to Ming Lee, I was taught to from a young age to work hard, get good grades, and never let anybody tear me down. But as great as these messages were, they didn’t always translate well into the real world. Often, my peers would read my outspoken nature as “weird” or “nerdy.” And just like Mei, as I got older and life got messier, I felt like my friends were the only people I could be my authentic and “messy” self around. Yet I still upheld my grades and remained tame when talking about my classmates because that was what she wanted from me.

My mom was nothing short of a genius- she was the hardest worker I knew that was never afraid to speak the truth or get dirty. She was the first person to go to college in her family, and an Ivy League one at that. She was the definition of excellence, and that was precisely what she wanted for me… right? But as I learned more about my mother, I realized that she wasn’t the sort of untouchable figure I perceived her as. She suffered through debate classes and somehow lost her wedding ring on her honeymoon. My mom could be just as much of a mess as I was- and you know what? That made her pretty cool.

Overall, Turning Red is nothing short of an amazing film that has something for everyone: the rush of saccharine-sweet 2000’s nostalgia, the adorable furry pandas, the quirky cast of characters- but most importantly? The complicated yet unbreakable bond between mothers and daughters. Mei and Ming faced many challenges, yet they emerged stronger than ever. Perhaps we can all take a page out of their book- when you get the chance, try to squeeze in some time with your own mom. It doesn’t have to be anything special; you can just eat lunch together or take a walk and talk to each other. Share something that’s been bugging you or a funny story or a weird dream you had or just about anything- and chances are? She’ll know exactly what that’s like.