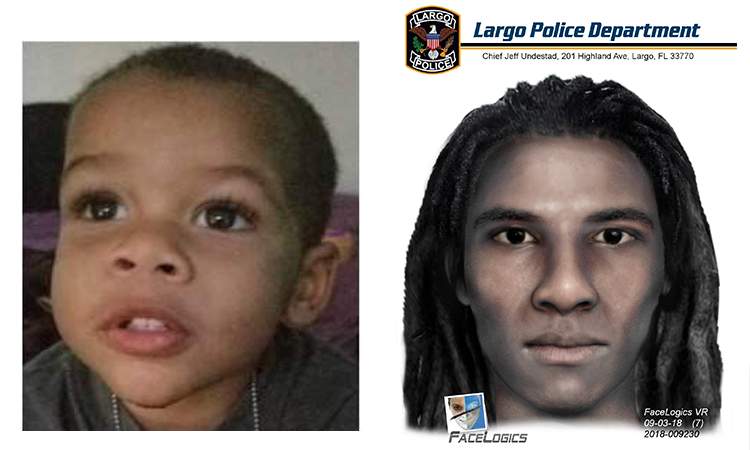 Jordan Belliveau (to the left) and Antwan (to the right).

On September 4, 2018, police released a sketch of what is believed to be the kidnapper in the case of missing 2 years old, Jordan Belliveau.  Jordan was last seen entering a white Toyota Camry at about 9:30 pm on Saturday with his mother. The alleged kidnapper is believed to be named “Antwan,” and a black male with brown dreads.

Charisse Stinson and her son Jordan Belliveau were in the East Bay Drive area on Saturday, September 1st, when they were offered a ride by a man, believed to be know as “Antwan.” Charisse claims that rather than giving them a ride, she and Antwan got into a physical altercation resulting in her unconsciousness. Jordan’s mother says that she woke up Sunday morning in a wooded area of Largo Central park, unable to locate her son. An amber alert was later sent out by the Largo Police Department.
The Following description for Jordan was released by Authorities:

Jordan was last seen wearing blue gym shorts with a black and white stripe, a blue shirt with the number “72” on it, and black and white Nike sneakers.
He is a 2-year old black male, about 2 ft 6 inches in height, and weighs approximately 30 pounds. He has short brown hair and brown eyes.
Jordan has a birthmark on the right side of his stomach, and a partially healed cut under the side of his chin.

The Following description for Antwan was released by Authorities:

Antwan is a black male approximately 25 years old with brown dreadlocks and brown eyes. He is believed to have gold teeth.
He was last seen wearing a white tank top and black shorts with the “AND1” logo on them.

If you have any information about the missing child please contact Largo Police Department at (727) 587-6730 or call 911.