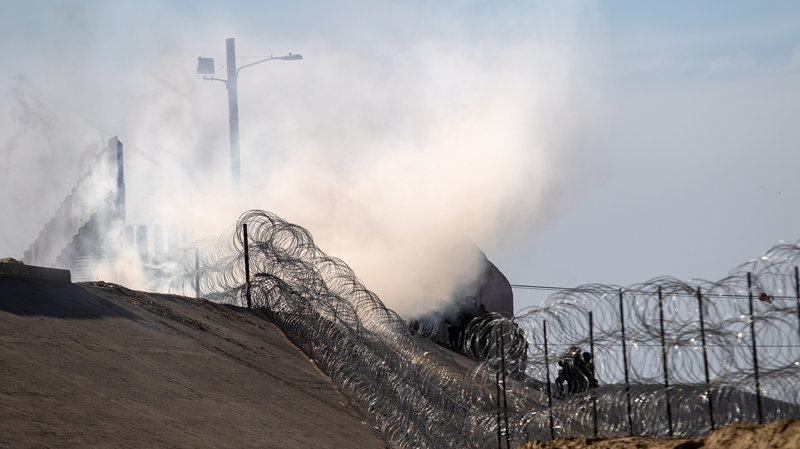 On Sunday November 25th, Mexican citizens that were seeking asylum in The United States were having a peaceful protest in Tijuana in response to authorities only allowing about 40-100 people to legally cross the border into the U.S. every day.  The Mexican police attempted to control the crowd of protestors, however, some people got through the police and started to push against a chain-link fence on the border. It was also reported that some people began to throw rocks at border patrol. As a result, United States government agents shot multiple cans of tear gas at people on the opposite side of the Mexican border. The gas travelled half a mile and affected families with children who weren’t anywhere near where the tear gas was initially thrown.

Many people are now questioning whether or not it was morally right for the agents to react the way they did. Some say that using tear gas at the border shouldn’t be demonized. According to the article, “Tear Gas Use for Illegal Migrants Isn’t a ‘War Crime’. “It’s Nothing New and Saves Lives”, the author, James S. Robbins supports the recent situation. “Tear gas was also used at the border in 2007 in response to attacks on border agents with stones, bottles, bricks and ball bearings fired with slingshots. Border Patrol officials argued then that the use of nonlethal force was a potentially life-saving measure, not only for law enforcement officers, but also for those throwing rocks.” However, there are people who disagree with border patrol’s use of tear gas. Jamil Dakwar, the director of the American Civil Liberties Union’s Human Rights Program wrote an article titled “Tear Gas should Never Have Been Used at the Border. It Doesn’t Belong at Protests Either.” The article says, “But using tear gas on a crowd of unarmed, largely peaceful migrants, including children, is far from ‘accepted.’ Under international human rights law, U.S. border officials may use force only when necessary, and the force used must be proportionate to the seriousness of the offense and the legitimate objective to be achieved — when it is necessary to maintain order and protect lives.”

This situation has brought light to immigration into The United States and has sparked debates between both Conservatives and Liberals. About 100 people were arrested on Sunday between both U.S. and Mexican authorities.