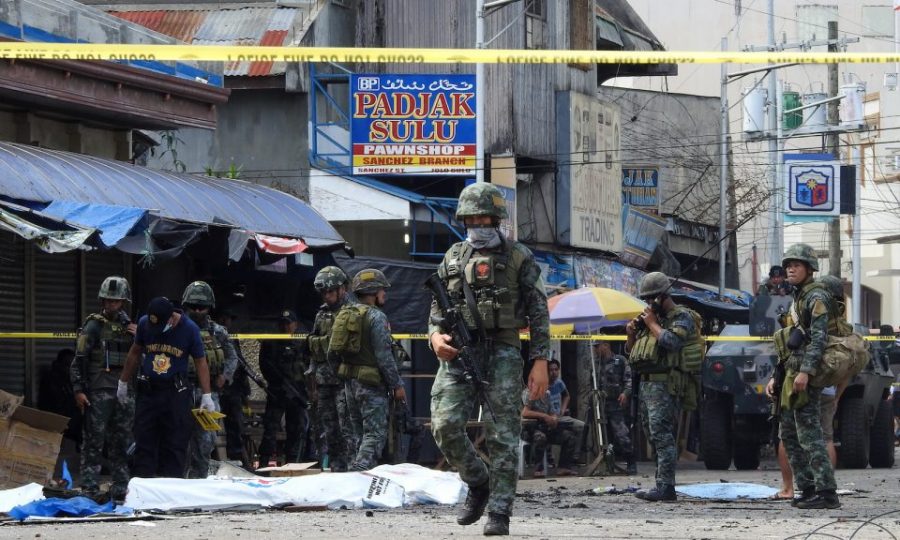 Two bombs left a Roman Catholic cathedral in the southern Philippines in ruins Sunday, killing 20 innocent victims and leaving dozens more in the hospital. Two inferred bombs were set to detonate at different intervals inside of a Jolo Catholic cathedral; one erupting inside of the structure and another targeting the servicemen and women running to help the injured in the first attack. Authorities say at least 81 victims have been wounded in the event, 14 of them being soldiers in Philippine Armed Forces and two being Philippine National Police officers.

ISIS, a designated terrorist organization, has since claimed responsibility for the attack on Sunday via its Amaq News Agency. The Islamic State has displayed through this act of violence the ability “to graft onto faraway militant movements and fan the flames of local conflicts by striking a high-profile target like a cathedral,” according to the New York Times. The attack occurred after part of the island, Mindanao, which also includes Jolo, casted a general vote on a fragile peace process. Hermogenes Esperon, the Philippine’s national adviser, insinuated that the bombings were the work of rebels associated with Abu Sayyaf, a “separatist militia group” a part of Jolo prohibited from participating in the peace process. Abu Sayyaf has been a threat to the region for years, locals and foreigners alike, as they rage violent attacks on the islands through kidnappings, beheadings, and other brutal actions–this does not exclude periodic bombings.

Six people can be seen in a video footage of the cathedral. Authorities are considering the individuals as suspects; the alleged bombers may be relatives of the members affiliated with Abu Sayyaf.

Authorities are still looking into evidence on the event. Defense Secretary Delfin N. Lorenana voiced his support for those impacted by the bombing “As we convey our sincerest condolences to the families and friends of the victims and offer our sympathy to the peace-loving people of Sulu who are severely affected by this dastardly act, we assure our people that we will use the full force of the law to bring to justice the perpetrators behind this incident.”