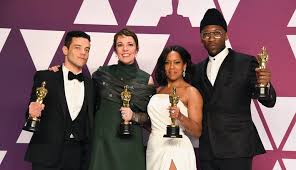 The 91st Academy Awards was a huge night for celebration and although there was no host, the award was praised for marking a number of big milestones, such as a remarkable amount of women and people of color achieving historic wins.

In the past, the show has faced a lot of criticism for the lack of diversity in nominees. The Academy has recently been trying to address these issues. In 2018, they invited a group of 928 new members to increase representation of people of color from 13 percent to 16 percent, and women from 28 percent to 31 percent.

Though there was still a big amount of male categories this year, on Sunday night several women not only won Oscars, but became the first of their identity groups to do so, and for the first time ever, people of color won the majority of the awards.

Roma and The Favourite led the most nominations with 1o each on Sunday. However, Greenbook took home Best Picture while Rami Malek and Olivia Colman won big in the best-acting categories.

Here is the full list of all the winners that went home with an Oscar:

Best actress in a leading role

Best actor in a leading role

Actress in a supporting role

Actor in a supporting role

“Spider-Man: Into the Spider-Verse”